Spring they implied, not in my book, it was brass monkeys out there. I set off early from Windsor for a 150 mile round trip to Lord Bathurst’s estate in Cirencester for the bi-annual TriFerris MTB Duathlon. It is an event that I have competed in many times over the years, so I knew what to expect, usually mud resembling treacle and plenty of it. There are two distances, the long and short event. I opted for the short event, 1M, 5M, 1M, which doesn’t seem too far, but believe me, it still tests you.

My preparations for the XC Run, XC Bike, XC Run had gone really well. I hadn’t run for over two months, and Dieter’s Tuesday night circuits had rendered every muscle in my body useless from the neck down. Apart from that, I was fit as a butchers dog.  As it was Valentine’s Day I made good use of the opportunity to slip out of the house early and arrived in time to do a quick recce of the bike route, which confirmed to me that the woodland sections would be slippery and treacherous.

If anyone has competed cross country before, you’ll know that traction can be a big issue, both on and off the bike. The run section was along farm tracks through woodland, so churned up, the sodden earth and autumn leaves combined to form a slurry like substance that stuck to you quicker than a tramp on a sandwich.  But, I felt confident. I was sporting my trusty ‘More Mile’ trail shoes, and I had changed my MTB tyres for narrower mud shedding 1.7’s.

Now, I’m normally a rock up and see type of person, but this time I actually worked out where I would aim for on the last flat section of the bike and climb into the finish. Then my overall tactics were quite simple, try to get ahead in the run, so you don’t have to pass people on the single track bike section, then save something for a solid push home.  I have to say, it paid dividends as I passed others who had come to a complete standstill in the mud. When I refer to passing, I mean cycling slightly faster than walking pace.

But, best laid plans and all that…. mine didn’t quite work out the way I had intended.  On my run in, I had a look similar to that of Arnold Ridley from Dad’s Army. That vacant stare of someone who has no idea who he is, where he is, or what he is doing.

Needless to say, I finished, but just. The bike section took a lot out of my legs, as I slogged through mud, grass and leaves that collected on mass and rendered your chainset inoperable. So much for skinny tyres and clearances. 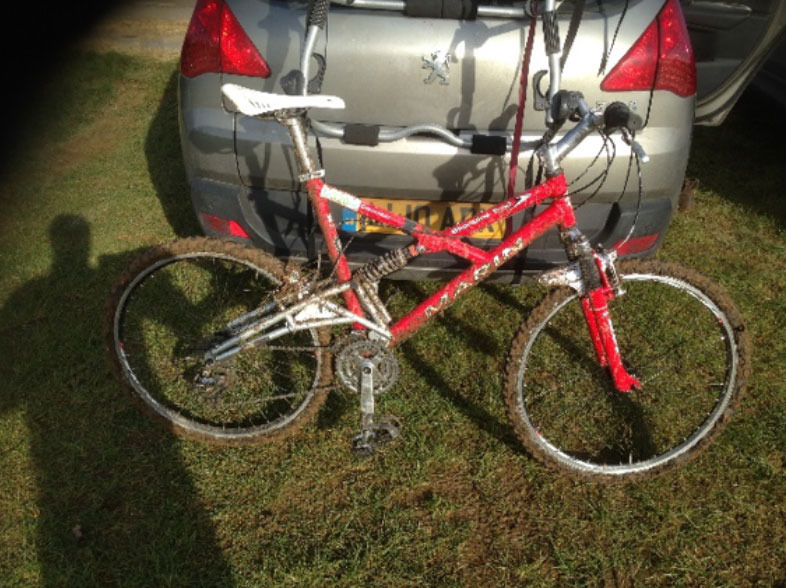 The second run felt as my legs had been replaced by pillars of concrete with anvils attached as feet. Did I mention it was cold that also didn’t help. My finishing stats look quite impressive until you discover there were only 15 males in the short race and 10 of those we’re Vets 40+, Shusshhh, no one need know the details, apart from 28th out of 47. 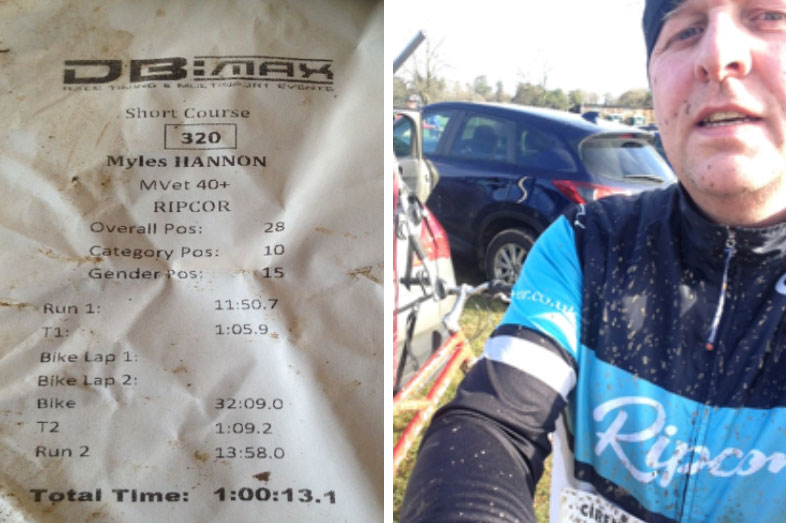 These days, I compete to finish, which is just as well, because I’m pretty crap at this cycling lark. I had to laugh, as Mo Farah can run 5K in 13:50:38, faster than I can run 1.6K in the mud. I bet he’d be rubbish on a bike though. Maybe the attraction for me is becoming an ol’ dirty b@stard, in my own special way.